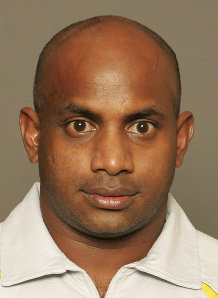 
Sanath Teran Jayasuriya is an all-rounder, he has been a member of the Sri Lankan cricket team since 1989. He is the only player to score more than 13,000 runs and capture more than 300 wickets in one day internationals. He is also regarded by many critics and supporters as one of the best ODI players.

Jayasuriya is part of the Mumbai Indians team in the Indian Premier League where he presently opens the batting alongside Sachin Tendulkar.

Jayasuriya held the record for the highest Test score made by a Sri Lankan, 340 against India in 1997. He was the key player in Sri Lanka's victory in the 1996 Cricket World Cup, where he was adjudged Man of the Tournament in recognition of his all-round contributions. Jayasuriya revolutionized one day international batting with his aggressive tactics during the 1996 Cricket World Cup, a strategy they first tried on the preceding tour of Australia.

Head and Lyon rip through Sri Lanka to secure huge win [+]
Travis Head (4/10) and Nathan Lyon (4/31) destroyed Lankans in the third innings with their spin, skittling them out for 113.

Green stars as Australia build strong lead on truncated day [+]
The first session of play was washed out due to rain.

Five for Lyon as spin dominates action-packed first day [+]
Lyon leads bowlers day out as Australia bowl Sri Lanka out on day one.