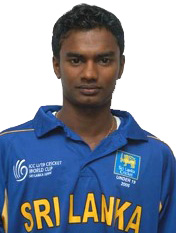 
Malinda Pushpakumara (born 24 March 1987 in Sri Lanka capital city Colombo) is a slow left-arm spinner who plays for Moors Sports Club. He took the most wickets in the 2016-17 Premier League Tournament, with a total of 77 dismissals from 9 matches and 18 innings.

The consistency with which he has performed is not only consigned to the A team, but in the past three seasons he has won the best bowler award twice by topping over 50 wickets in the Premier league for his club.

On 3 August 2017, finally he was debut in second Test against India at SSC, Colombo and on 31st August make ODI debut.

Herath to captain for Bangladesh Tests
Players Index by Type

Root superb 186 gives England hope in second Test [+]
Joe Root hits a magnificent 186 but his dismissal from the final ball of the third day leaves Sri Lanka with a slight advantage in the second Test.

Root and Bairstow steady England after Sri Lanka post 381 [+]
James Anderson and Joe Root keep England in contention on day two of the second Test against Sri Lanka in Galle.